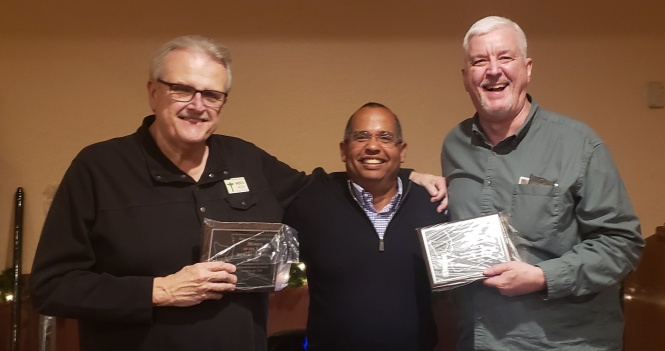 At the Club’s annual Christmas dinner on December 11th, President Rob Fanfant presented the WWDXC membership awards. Among this year’s winners were:

Most Valuable Player: N6KW Chuck Miller. As Trustee for the W7DX license, Chuck performed yeoman duty to ensure all hams worldwide who worked us would receive a QSL card in the mail. During the Salmon Run contest, that amounted to thousands of cards, all individual prepared. Sadly, Chuck passed away only weeks ago. His award and accompanying plaque were presented at his memorial service only days before our dinner.

Johnny Dak Lifetime Achievement Award: K7EKD Larry Hanson. The steady and wise counsel of Larry on the club’s Board of Directors has been a blessing for many years. Larry recently announced his retirement and was chosen for the JDLAA by unanimous acclaim.

Member of the Year: Co-awarded to W6RS Rich Stempien and W7CD John Zantek for their management of, and program and entertainment successes at the 2019 Pacific Northest DX Convention, hosted by the WWDXC this past August. Attendance records were shattered.

June 9th, 2020 The statewide Stay At Home order has not been lifted, so this will be another online meeting.  An announcement will sent out to members via email.   The presentation will be the VP8PJ South Orkneys DXpedition and be given by WWDXC President Rob Fanfant.  Details about our monthly meetings and a catalog of past programs… Read More »