If you recently keyed the club’s 147.00 machine, you may have noticed the signal’s different. Hopefully, you’ve seen an improved RF signal. You may have also noticed the audio quality’s improved. So what’s changed?

After many months of polls, debates, and plans, we’ve taken action. The old Kenwood repeater was running at 25w from a site at Maple Leaf. The repeater was then shut down and the West Seattle club was borrowing our repeater pair and using it on their repeater in West Seattle. Coverage was marginal beyond the City limits.

The nearly 20-year old Kenwood repeater was then moved to Union Hill in Redmond. The measured RF output from the repeater, run through the Phelps-Dodge Bp/Br duplexer cavity array, then through ~250ft of feedline (@3dB attenuation per 100′) left minimal power being delivered the antenna, a Comet GP-9. While the coverage was better than West Seattle, we knew it could be improved.

We looked for a combination amp/preamp that would accept an input greater than 5w, which is the common design but would be ‘blown’ by the signal from the Kenwood. That Kenwood repeater can only deliver 50w or 25w; it was running for years at 25w simply because it wasn’t rated for continuous duty at 50w. Instead of an amp/preamp, we encountered a better solution.

A new repeater! N7QT was offered and accepted, with the Board’s unanimous consent, a two-year old, virtually unused Hytera commercial VHF repeater. It’s rated for 50w at a 100% duty cycle. Additionally, with only a software selection, it can support conventional wide-band FM, or narrow band FM (12.5kHz NFM), or should the Club desire it, run the modern Digital Mobile Radio TDMR protocols….or a combination. It was decided that instead of digital-only, or a hybrid of both, that we would run it as an analog 25kHz wideband FM for now.

So please start using the new repeater as our Club ‘watering hole’. It’s still 147.00MHz, -0600 shift, and CTCSS (PL) of 103.5. Reports so far are encouraging, as members who couldn’t hit the machine when it was in Maple Leaf or West Seattle are now getting a full-quieting signal from Redmond.

The next step? Find a great high-site at the right price and move it: cabinet, repeater, duplexer, power supply, a UPS, new feedline, and a new robust mountain-top antenna to a site with Internet access and emergency backup power. A much shorter feedline run, using new heliax, would be a boon, since it would reduce the VHF loss to 1dB/100ft or better.

We should all investigate high sites that we directly know about or can find out about and let a Board member know the details. 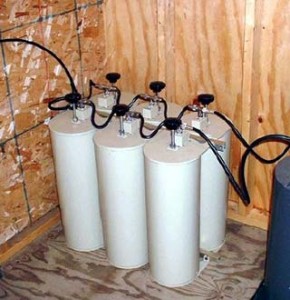 A Phelps-Dodge 6-cavity Bandpass-BandReject (Bp/Br) array. They provide better than -95dB of isolation between the repeater’s transmitter and receiver. Ours was purchased new in 1976 and they work just as well today as they did back then. We verified with a professional bench testing, including the use of a calibrated HP Vector Network Analyzer. Industry standard insertion loss is 3.0dB, and most good duplexers can be tuned to reduce that loss to 2.0dB. We have only a 1.3dB insertion loss.

This month the WWDXC club encourages members to participate in the Pacific Northwest DX Convention. As a result, the next regular club meeting will be in September. The PNW DX Convention begins on Saturday, August 7th at 9:00am PDT and runs until 5:15pm. Register before August 6th if you want to be included in prize drawings, with an… Read More »