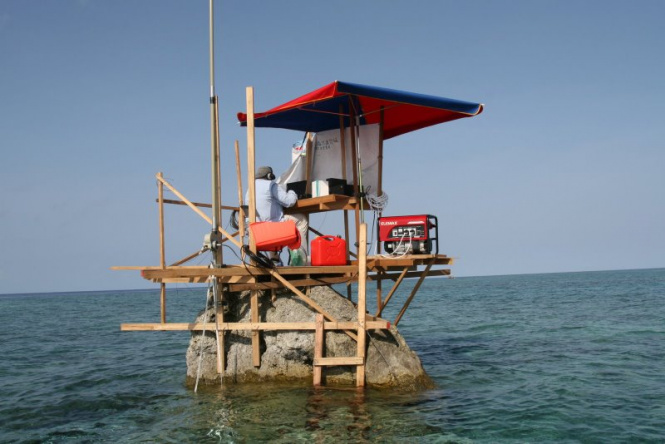 At our last club meeting, Hal, W8HT, presented an excellent program about the NCDXF-funded Radio In A Box (RIB) initiative. As Hal explained, RIB embodies the idea of placing a complete station enclosed in an environmentally-protected box ashore in a DX entity, and allowing that station to be controlled from a remote operating point such as aboard a nearby vessel. For some rare entities with safety and/or environmental concerns, this might be the only way hams will ever get permission to activate them. Some examples of where the U.S. Fish & Wildlife Service have restricted public access are Midway, Navassa, Johnston, Kure and Swains. The French similarly have restricted their islands in the Indian Ocean. Deployment of RIB technology hopefully will reduce governmental resistance to granting permission both because it will minimize our human footprint on the land and also because it will enhance safety for the DXpedition team by eliminating many trips through the surf.

A question immediately arose. Is RIB operation permitted under the DXCC Rules? As recently as the PNW DX Convention in August, 2019, when the same subject was brought up in the ARRL DX Forum in the wake of the failed Bouvet Island trip, we thought the answer was no. We were strongly reminded by senior DXers, including some ARRL officials, that remote operation from a vessel was not recognized as valid. Many of the almost 200 DXers in the audience concurred; the entire operation must be ashore. “Boots on the Ground” was the rallying cry in the room, just as it had been at a similar Forum in Visalia a few months before.

But wait! What do the Rules actually say? Well, surprise, surprise. The Rules were changed by the ARRL’s Board of Directors in January, 2015, to say that the control point of a transmitter does NOT have to be ashore (or, for that matter, even in the same DXCC entity). The Board specifically deleted from DXCC Rules, Section I, Rule 8, the sentence which previously required a remote operator to himself be land based.

Here is what Rule 8 said prior to the Board’s action:
“8. All stations contacted must be “land stations.” Contacts with ships and boats, anchored or underway, and airborne aircraft, cannot be counted. For the purposes of this award, remote control operating points must also be land based. Exception: Permanently docked exhibition ships, such as the Queen Mary and other historic ships will be considered land based.”

And here is what it says now:
“8. All stations contacted must be “land stations.” Contacts with ships and boats, anchored or underway, and airborne aircraft, cannot be counted. Exception: Permanently docked exhibition ships, such as the Queen Mary and other historic ships will be considered land based.”

The ARRL CEO Dave Sumner, K1ZZ, said at the time that the Board’s “changes are subtle but significant. The modified rules make clear that contacts with legally licensed, land-based, remotely controlled stations count for DXCC, but the control point – the operator’s location – of a remotely controlled station no longer has to be land based; the operator can be literally anywhere.”

So, bottom line, is that RIB technology is a “go” and with it hopefully will come a slew of QSOs with rare DXCC entities which we might never have made otherwise. Hopefully, we may never again need to see anything like the Scarborough Reef photo.

Note: Islands on the Air, Ltd, is independent organization and their IOTA program is not subject to ARRL DXCC Rules.

This month the WWDXC club invite folks to come listen to Yuri, N3QQ and Rob, N7QT present their experience with the KL7RRC expedition to Adak, Alaska. The meeting will begin at 5:45pm PDT for socializing and club business. The main attraction will begin at 7:00pm PDT. We hope to see you there!